Excerpts from My Days with Ramkinkar Baij 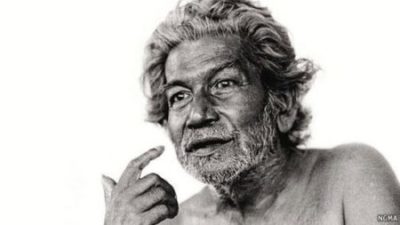 first arrived at Santiniketan in 1942, after clearing the Matriculation examination. That was the first time I saw Kinkarda. In time, our acquaintance grew closer through my father, who, as Kinkarda’s batch mate, was a member of Kala Bhavana’s first student body.

I saw Kinkarda and marvelled at his works during my student life. Then again, I saw him with his works on burning afternoons or in the evening’s shadow-caped deepening dark. But at that time, I didn’t have the requisite insight and maturity to know him well. In 1957, I joined Visva-Bharati as a teacher. That’s when I found him again, in a totally new way. For twenty-three years, between 1957 and 1980, my close association with him made our relationship much more intimate and deeper. I hold this fellowship and intimacy in great esteem.

However, I didn’t realise that this closeness had also gradually fostered in me an uncomfortable dissatisfaction and unease. At one point this became clear to me. Everyone knows Kinkarda as an outstanding artist—one of the finest exponents of neo-Indian art and perhaps the greatest of sculptors, whose originality is undoubted, who never wore labels of ‘East’ and ‘West’, who was independent and walked on his own path. Some see him or like to view him as a rootless Bohemian artist. His lifestyle is completely different from Western Bohemian artists; rather, he is closer to the bauls of Bengal, oblivious of worldly concerns. In this respect, I wholeheartedly agree with respected Manida (artist K.G. Subramaniam). That Kinkarda is driven by an inner force, empowered by sheer outstanding talent, resulting in the birth of extraordinary works of art isn’t the full story. He lives in a world of introspection—contemplating about the nature of life. Entwined with this is his world of artistic thinking, in itself fertile and rooted in life’s experiences.

What many of us do not know is that these experiences have been shaped by the sharp observation of his highly alert sight, the perceptions and realisations of his overly sensitive heart, his self-study and reflection, and many other influences. Benodebehari Mukhopadhyay—Ramkinkar’s batch mate and another talent of Kala Bhavana—also took up the pen besides pursuing painting. He wrote many valuable articles, criticisms, autobiographical and semi-autobiographical pieces. These reflect his analytically-rich intellectual strength as much as they highlight his experience and perceptiveness.

Kinkarda, though, never took up the pen. He did not have that mindset. Nor did he have the time. He had devoted his body, mind, life to ceaseless creation….I decided that if he would permit me to do so, I would come to him according to his wish and leisure. I would glean bit by bit, the best I could, from my interactions with him. In this way, at least some things could be preserved for those who want to know him, understand him deeply, or those who would never have the good fortune to see him, to listen to him.

Even as I was contemplating this, an unexpected opportunity came my way. At the time, Kinkarda used to stay at Shankhoda’s (artist Shankho Chowdhuri) mud house in Ratan Palli. That house was on the verge of collapsing. To my great delight, Kinkarda came to live in house number twenty in our Andrews Palli, right next to me. Without wasting any time, I grabbed this opportunity.

Morning, afternoon, evening, late evening—I visited him at all hours. On off days and holidays, a passion to leave everything aside and run to him would seize me. After nearly a year of such sessions, the work was complete.

Read the rest in The Beacon