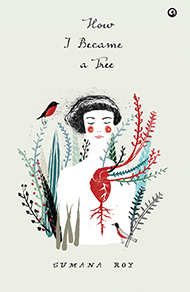 I was in primary school when I first heard trees talk. On my way to school every day as I sat by the window of our school bus, leaf-laden branches of trees sashayed as the bus zipped past them. I was convinced this was the trees’ way of sending me off to school with a bunch of good wishes. On still, humid days, when my green friends didn’t seem as enthusiastic, I feared about the mood of the day facing me. Though brief, this moment of intimacy with the trees lining the one-way separators on South Delhi roads, was crucial for the emotional subsistence of a lonely child like me. For Sumana Roy, the necessity of this bonding – with plant life, with trees, swaying or still – is so acute that she wishes to morph into one. And sort of does. How I Became a Tree is the story of that astonishing transformation.

But why this overwhelming desire to become a tree? Roy’s discontent with her human form is not so much biological as it is psychogenic. The two corollaries of modern life that disturb her most – excessive noise and speed – are the very things trees counterpoise with defiant ease. Early on in her intuitive journey, the author discovers tree time – a moment distilled in past- and future-less clarity. Trees teach her to let go of her slavish relationship with conceptual (man-made) time and relax in the moment. She notices the impartial kindness of the tree – equal in its dissemination of oxygen, shade, flower, and fruits to the gardener as well as the woodcutter.

The need for association with nature isn’t new. For long, it has been the favoured route for those on a spiritual quest. There are extensive records of sages and philosophers renouncing the material trip to go inside forests and sit by lakes, in search of answers only solitude can retrieve. What makes Roy’s quest deliciously different is her part-lover, part-parent, and part-playmate relationship with trees. She even becomes a tree sleuth – recording their “vocalizations” – “I had, in frustration with industrial noise and human verbosity, mistaken trees as silent creatures. My experiments with the sound recorder had brought about a new realization – that trees shared a natural sound with people.” She engages with trees in other interesting ways – by getting X-rays of tree trunks and by turning dead trees into sculptures. All these experiments grow deeper the roots of Roy’s conviction about the interchangeability of trees and human figures. She begins listening to human voices in relation to their tonal proximity to the sound of leaves in the wind. Her own skin becomes the bark of a tree and she imagines her bones getting rearranged for her to acquire a tree form.

In loving trees, Roy doesn’t forget the shadow world. In fact, by her own admission, her relationship with trees is shaped largely by their shadows. In a chapter curiously titled A Brief History of Shadows, she rues how shadows are unceremoniously left out of history books and archives and, through personal reminiscences and her reading of Roy Sorensen’s Seeing Dark Things: The Philosophy of Shadows, she eloquently makes the case for studying shadows for the things they can reveal. For me, though, her observation of what tree shadows withhold, or rather, erase, is of even more stunning import. “…The shadows of trees obliterate specificity, the colour of bark and leaves and flower and fruit. Just like the shadows of humans do not reflect race, class, or religion.”

As her disenchantment with modern industrial routine grows, the author is compelled to examine the stitches of mythology and scriptures, literature, philosophy, and art – to find threads of the human-tree convertibility phenomenon. Greek and Roman mythology tell her how women turned into trees to escape violence, human violence. Reading these episodes chillingly remind one, as they do Roy, of young Dalit women being raped and then hung from trees in present-day India. But she also finds “sahrydayas” (Sanskrit for soulmate or sharer of the soul) – humans who have shared her own kinship with trees. One of them is the artist Nandalal Bose who, while articulating his thoughts on drawing trees, remarkably compared their features and even personalities to those of humans.

Then there is Rabindranath Tagore – with both his extensive work with trees in Santiniketan and his personal anaclisis to plants. Like most plant lovers, he misses his plant relatives when he’s away on a trip and writes letters to human caretakers to look after them. It is only natural then for the universe of his writing to be populated by plant metaphors. Roy sees in his works illustrations of trees becoming doubles of humans and gardens turning into both accomplices in aiding stolen love and partners in avenging lost love. The chapter, “Studying Nature”, brings to the reader Tagore’s organic vision for spreading the joy of nature among the students of his school-cum-university, Visva-Bharati. The focus of the nature study module isn’t so much on the science of ecology, as Roy discovers, but on fostering an easy kinship with nature from which the industrial machinery threatens to pull the children away. “What his students inherited through his course was a sense of trees as participant, friend, and neighbour, in the ongoing drama of life…,” concludes Roy with endearing empathy.

For a tree lover in the pursuance of her treehood, the journey cannot be complete without entering a forest. Part VII of How I Became a Tree, titled “Lost in the Forest” was a personal delight for me. I have experienced several lost-in-the-forest moments myself, richer in the losing every time. Roy’s own love affair with the forest bears this out with succulent relish. She argues how the very act of walking inside the forest has to be an act of total surrender – one must intentionally lose oneself when surrounded by the “paralyzing restfulness” of a forest. She returns to Bibhutibhushan Bandyopadhyay’s forest-centred novel Aranyak to unearth the mystery of man’s tense relationship with the forest. It is at once a place for finding repose as it is a resource to be exploited. Staying inside a forest all by herself enables Roy to experience the commune of trees, their shunning of individual prominence. In this, she recognizes her own treeness, given her indifference to fame and its exhibitionism.

Roy finds more soul sharers – as a plant parent in the polymath scientist, Jagadish Chandra Bose – who conducted numerous experiments to prove plants can feel and communicate; in the Buddha whose persona is essentially inseparable from the Bodhi tree under which he’s believed to have found enlightenment; and in poets, philosophers, and photographers who saw embedded in the barks and branches of trees reflections of their own self. And that is how Roy eventually turns into a tree. She imagines herself to be the Ashoka tree – A-shoka, sorrowless, as she segments the tree name.

On a personal note, Roy has taught me to love plant life in a deeper, more joyous way. Shortly before I wrote this, my partner took out a leafy indoor plant to the patio to feed it sunlight (as Roy would put it). The delicate plant died from the sudden shock. I have mourned the loss of plants before, but this was post How I Became a Tree, and I bawled my lungs out. Then, once the tears let up, I remembered I had once snipped a part of the plant and placed it in a jar of water, where it grew roots. I brought that part out of the jar and planted it in the pot that now carried the dead roots. It was almost as if someone had nudged me to do this – to bring the plant back to life.

How I Became a Tree is available on Amazon India.